Server-side rendering is great way to increase the perception of loading speed in your full-stack app. Users get a complete page with visible content when they load your site, as opposed to an empty page that doesn't get populated until JavaScript runs.

One of the downsides of using Laravel as a backend for Vue.js was the inability to server render your code. Was. The release of Vue.js 2.5.0 has brought server-side rendering support to non-Node.js environments including PHP, Python, Ruby etc.

In this tutorial, I'll take you through the set up steps for Laravel and demonstrate a simple server-rendered app. Get the code for this here on Github.

If you aren't familiar with server-side rendering (SSR), here's a simple example: say we have an Vue.js app built with components. If we use the browser dev tools to view the page DOM after the page has loaded, we will see our fully rendered app:

But if we view the source of the document i.e. index.html as it was when sent by the server, you'll see it just has our mount element:

Why the discrepency? Because JavaScript is responsible for building the page, and ipso facto, JavaScript has to run before the page is built. Fresh off the server, the page will have no content.

But with server-side rendering, our page includes the HTML needed for the browser to build a DOM before JavaScript is downloaded and run, i.e. the page source would look like the first example above. This is achieved by running the Vue.js app on the server and capturing the output, then injecting that output into the page before it is sent to the user.

With SSR, your app does not load or run any faster, indeed it may run slightly slower as the server has the added task of rendering the app. But the page content is shown sooner therefore the user can see engage with page sooner.

Why couldn't Laravel do Vue SSR until now?

Obviously, SSR requires a JavaScript environment on the server, as a Vue app is made with JavaScript. For non-Node.js backends like PHP, Ruby and Python, a JavaScript sandbox must be spawned from the server to run the Vue app and generate an output.

V8Js is a project that allows you to install the V8 JavaScript runtime within a PHP environment and create such a sandbox. But until Vue version 2.5.0, this was still not adequate as Vue SSR required certain Node.js APIs to run correctly. The recent update has made sure the server renderer is now "environment agnostic" and can therefore be run in Node.js, V8Js, Nashorn etc.

Let's now get a simple demo of Vue SSR in a Laravel app.

php-v8js is the PHP extension that will give access to Google's V8 Javascript engine. Undoubtedly the trickiest part of setting up Vue SSR with PHP is getting V8Js installed. Due to my limited Linux knowledge, it in fact took me several hours to get it working.

If you have a bit of skill with dev ops, you might try install it yourself. If not, I recommend you use this Docker image and install Laravel on that.

Got #devops skill and looking for a weekend project? A docker or vagrant image with #Laravel and V8Js would be super useful for #Vuejs SSR!🙏

Once you have the extension working and have a fresh Laravel project, you'll need to install both Vue and vue-server-renderer. You'll need a minium version of 2.5.0 to get the environment-agnostic SSR features.

Let's begin by setting up a simple full-stack Vue.js/Laravel app. This won't have any SSR features yet, but we'll be laying the foundations that we'll need. To start, we'll put app's main functionality into a single-file component, App.vue.

Our app entry file, app.js, will only be responsible for rendering the component and mounting it to the template. Using a render function here instead of a DOM template is essential for reasons that will soon be clear.

Let's set up a Mix configuration that builds the entry file. Note that I'm also overwriting the default Vue build to use the runtime-only build. Since we're using render functions and single-file components we won't need the template renderer.

With that done, you should be able to build the Vue.js app:

We'll need a Blade template to deliver our Vue app to the browser. Make sure to include an empty div with id app which will serve as the mount element. Also, include the build script.

Let's make a new controller class which will soon include the logic for server rendering the app.

To begin with, we'll create a method get that will return our app view:

We'll add a web route for the root path which calls this controller method:

With that done, we should now be able to view our humble full-stack app: 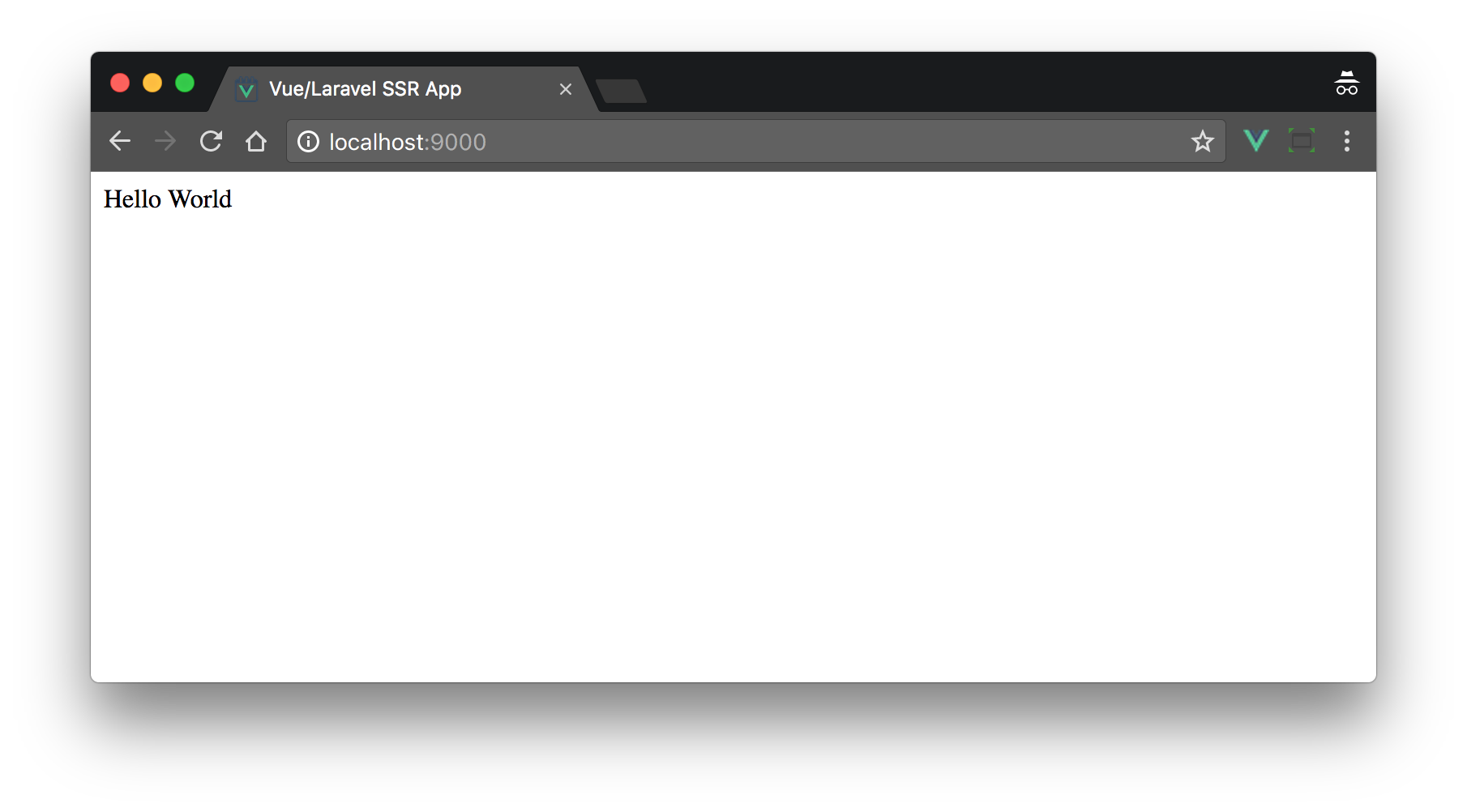 We will, therefore need two builds. These will be as similar as possible, but will have some small differences. We'll keep any common (i.e. universal) code in app.js, but any environment-specific code will go into the new entry files we'll create shortly. 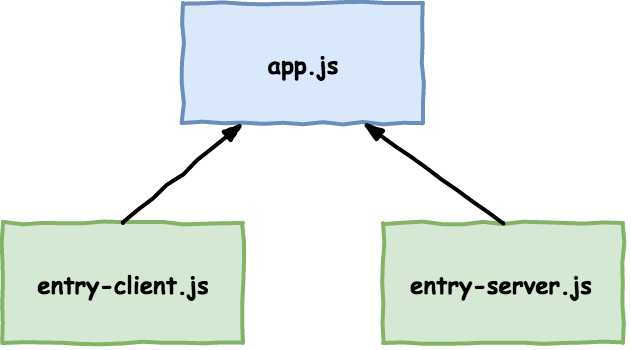 In app.js, let's remove the el property from the Vue config as it makes no sense in a server environment since the app has no document to mount to. We'll also make it so this file exports the app instance which can be imported in our new entry files.

We now need to create two new entry files, one for the browser (client) and one for the server.

The client entry will simply re-implement the functionality we just deleted from app.js i.e. it will import the universal app and mount it to the template.

The server entry file is a little more interesting. Firstly, it calls a global method renderVueComponentToString. This method is exposed by vue-server-renderer which we'll introduce into our SSR setup soon. Secondly, it calls a method print. This method is part of the V8Js API and is the mechanism for getting something from the JavaScript sandbox back into the PHP environment.

We'll now need to update our Mix configuration so that we get a build of each version of the app from the two new entry files:

After you run npm run dev again, you will, of course, have two build files. We'll need to update our Blade view to ensure the new client build file is being loaded instead of app.js:

If you refresh the page in the browser you should see no difference in behaviour yet.

We now finally get to the server-side rendering functionality. Add a new method render to AppController which works like this:

The value returned from render will be the server-rendered output of our app. It's an HTML string. We'll now assign this to a template variable and send it to the view. Be sure to skip string escaping by using the {!! !!} braces so the HTML is printed as-is.

With that, server-side rendering is now working! If you load the app, though, you probably won't notice any difference, as the page loading improvement on a local server is not going to be perceptible. To confirm it works, view the source of the document and you'll see this: 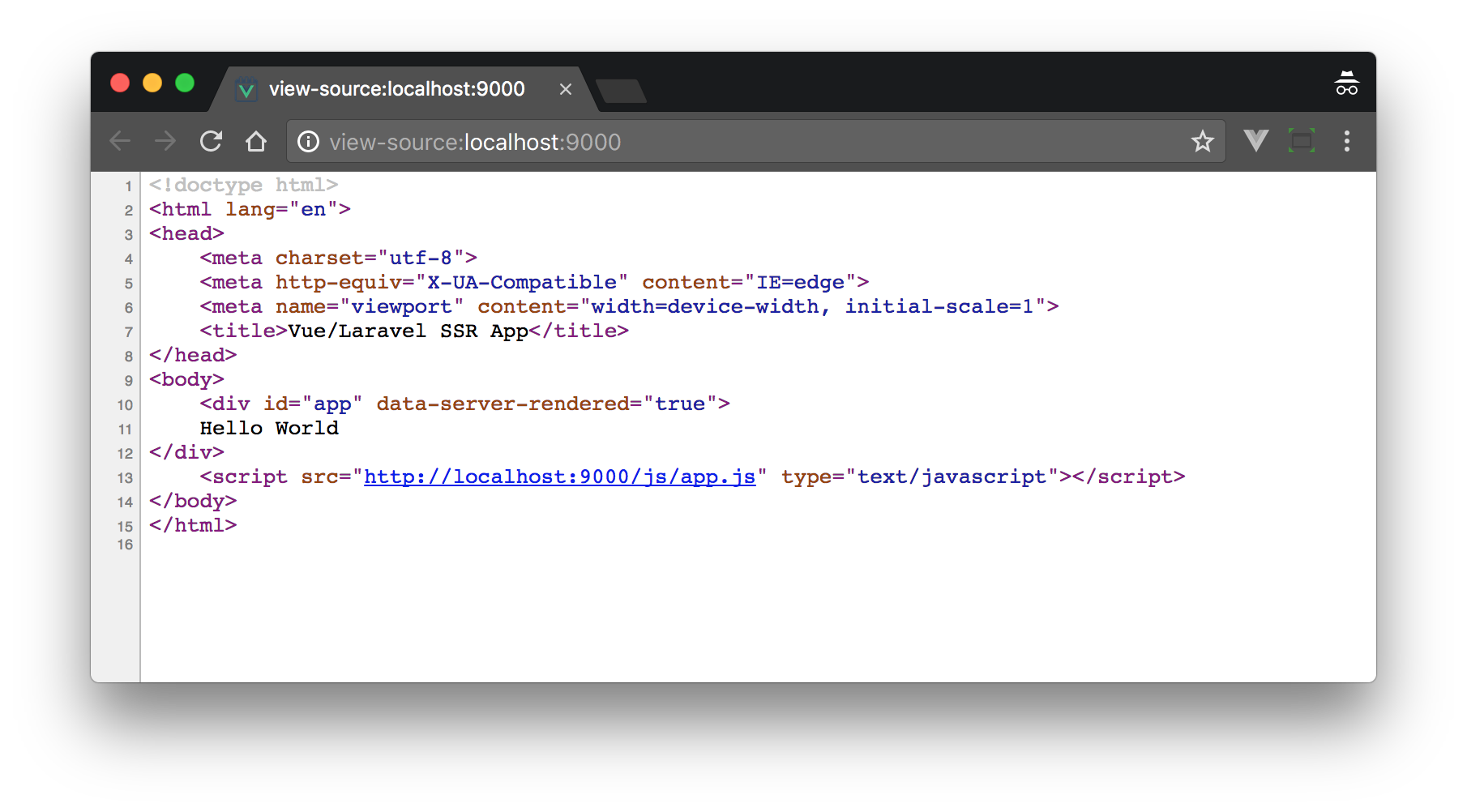 Rather than the empty <div id="app">, we have actual content in our page. Note the special attribute that vue-server-renderer adds: data-server-rendered="true". This is so that when the Vue instance mounts, rather than trying to re-build the content, it will attempt to mount over it.

Lack of server-side rendering was one of the biggest cons against using Laravel as a Vue.js backend. It's still is second-rate compared to Node.js since a sandbox is required, but it's great that it now works.

For more information on Vue SSR, check out the Vue.js Server-Side Rendering Guide.